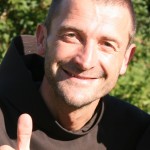 I was born on December 26th, 1968  in Lienz to Rita  Dorer, housewife and secretary, and Leopold Dorer, plumber master, deceased in 1989. I grew up together with four elder siblings in Dölsach, East Tyrol.

After elementary school and eight years at the Bundesrealgymnasium (high school) in Lienz, I graduated from high school in 1987. In these years I also made valuable experiences  being an altar boy,  boy scout,  member of the local brass band  and youth representative in the parish council.

Working with mentally and physically handicapped persons during my community service  (an alternative to military service) in 1987/88  at the Lebenshilfe in Lienz set the sails for my future career.

It was a pilgrimage to Medjugorje  (Bosnia Herzegovina) that encouraged me to find a new home in the Church.

In 1988, I started studying theology in Innsbruck. As a seminarian of the diocese of Innsbruck, I did a pastoral internship of over four months in Zams . A six-month-stay at the Gemeinschaft der Seligpreisungen (Community of beatitudes in Rees, Germany   and a pastoral year in Hötting (Innsbruck) left an indelible mark on me.

After graduating in theology in 1996, I joined the Franciscan order. After postulancy in Telfs (1996) and novitiate in Reutte (1996/97), I lived with the Franciscans inSalzburg, where I did my pastoral year  in the parish of St. Martin/Liefering and where I also worked as a religion teacher and with children and adolescents.

Between 1997 and 2000  I completed my studies in pedagogy of Religion.

In 1999, I took up residence in the Franciscan convent in Schwaz, together with four other young Franciscans. In addition to my work as a religion teacher at the secondary modern school in Schwaz and  the elementary schools in Pill and Pillberg, I was responsible for  youth work in the parish of Pill.

With my solemn profession (Schwaz, September 17th, 2000) , I publicly decided to live my entire life in the community of Franciscans and to devote myself to the cause of God and my fellowmen.

Two months later, I was ordained a deacon by bishop Alois Kothgasser in the cathedral ofInnsbruck.

On June 24th,2001 I was ordained a priest by the same bishop, together with six other candidates.

I celebrated my first holy mass in my home village Dölsach on Saturday, June 30th

and Sunday, July 1st, 2001 with the whole village joining in the festivities.

In the school year 2001/2002  I did my internship as a teacher at the Bundesgymnasium/Bundesrealgymnasium  Lienz.

2001-2011
I have been part of the Franciscan Friars in Lienz (East Tyrol), worked especially with young people (teacher, animator)

I am a responsible for the vocational accompaniment of young people,

spiritual caregiver especially for students in our public franciscan highschool in Hall/Tirol.

I’d like to thank the Lord for the adventure of my life. -And to all those who have accompanied me on my path , may Heaven repay you!